The following images are all photos I took in Japan.

Right: Unidentified flower in Tokyo, May 2014

Left: a tree dripping with persimmons against a backdrop of snow, December 2013

Right: a pansy bravely shows its face despite the cold, November 2013 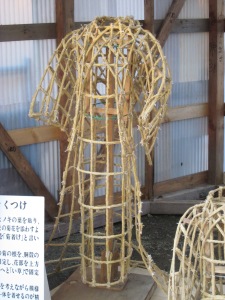 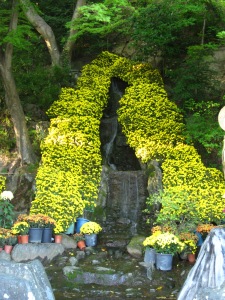 Pictures from the chrysanthemum festival in Nihonmatsu, October 2013. Figures are decorated in such a way as to be “clothed” in the flowers. The lower right photo shows the frame that is used. 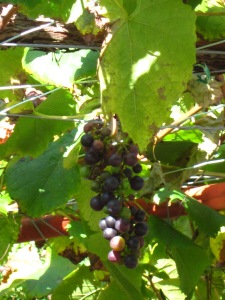 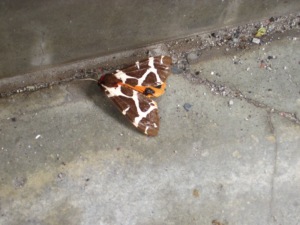 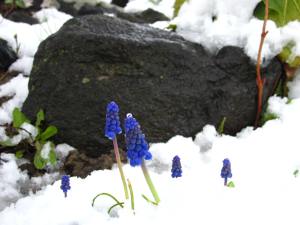 Above: Bluebells peek out from a late snow, Fukushima prefecture, April 21st, 2013 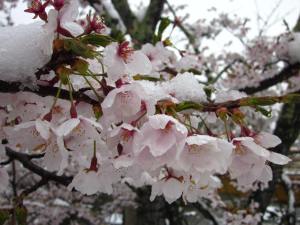 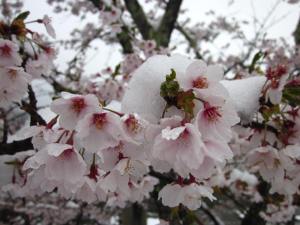 Above: Close up of blooming cherry blossoms after a late snow. Fukushima prefecture, April 21st, 2013

Above: Snow monkeys in their natural habitat in Arashiyama, April 2013. 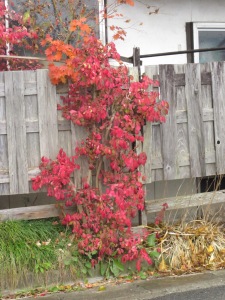 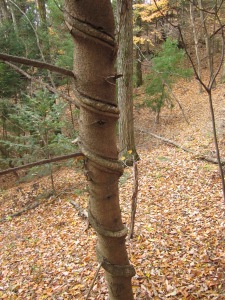 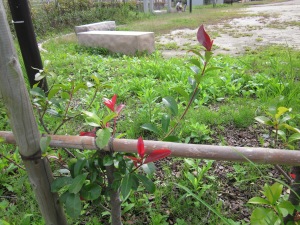 Fall leaves in Fukushima prefecture, and a tree slowly being strangled by a vine. Fall 2012.

Sites near my junior high: (Left) for some reason the summer of 2012 I saw a bunch of these guys living in a tiny marsh near my school. I would pause there each day to catch their red bodies swimming among the plants. The next summer, they were gone. (Right): some flowers planted at a house near my junior high. I’d never seen hollyhocks that color before.

Pansies, cultivated in one of the sprawling gardens: Fukushima prefecture, May 10, 2012

Flowers and a fern bloom in early May, Fukushima prefecture, 2012.

Shut up!
Unfortunately some of the first English the students here pick up is the, um, less than savory kind. Sometimes it is all out swearing. Other times it is just stuff that isn’t entirely age
appropriate.

Case in point: a scene from a couple weeks ago.

I was teaching a class of first and second graders. Though I bring a lot of energy to the classroom and like to make the curriculum fun, I do need the kids to actually listen. Usually the kids are great, but on this particular day the second graders were talking to each other instead of listening. After a few times of asking them to calm down didn’t work, I paused. I stood there holding the flashcards, slightly smiling, just waiting. This strategy works pretty well in the honor society of Japan. It is considered shameful that I can’t teach the lesson, especially as a guest teacher (I only come once every two weeks, and I’m only scheduled to teach the first and second graders once a month). The other kids, seeing that I had paused, turned around and tried to get the noisy kids to pay attention. But, of course, they wanted to show off their English too. So this precious little first grade boy turns around and clearly says to the older students, “Shut up!” The
tone wasn’t menacing or harsh. He said it like you or I would say, “Please be quiet.” Slightly mortified, I explained to them that these words weren’t polite, and I had them all repeat, “Be
quiet, please” after me. Then, since they were quiet, I went on. But I haven’t been able to shake the sight of that precious little boy innocently using words that got me in trouble at that age.

Very, very cute!
My apartment is not too far away from a preschool, and occasionally when I walk by a passel of 2 year olds is hovering near the open door. If this is the case, I often stop to say hello and give
high fives to them. This activity occasionally draws more of the toddlers to the door. Three or four of them have taken to compliment me when I stop. “Eigo no sensei kawaii!” (The English
teacher is cute!). “Arigatou!” I reply, and give them another high five. At which point another child usually takes his or her turn to affirm me. Which I thank him or her for, and give another
high five to. After three or four rounds of this, someone usually changes to, “Eigo no sensei kakoi!” (The English teacher is cool!). That statement is then echoed by another round of charming little faces. A couple of times a teacher will walk by and whisper to them. The teachers know I speak English and view this as an opportunity for their pupils to practice. “Very, very cute!” the girl will start to chant. The chorus is taken up by others. “Very, very cute! Very very cute!” Now they are jumping up and down, thrilled to pieces at my cuteness quotient and charmed out of
their minds that they can tell me about it.

There are some rough days in this country, and the culture is not one that works hard on affirmation, so as strange as it may sound, being serenaded by a bunch of two year olds chanting my praises can really make me feel better. Encouragement: I’ll take it in any language!

The Ground Shaking: just an ordinary day…
As most everyone knows, Japan is prone to earthquakes. The country as a whole probably receives at least one per day, but they aren’t usually big enough to feel unless they are decently
strong and fairly close. That combination only occurs every two to four weeks. Yet that is still frequent enough for it to become part of the background noise of life here.

What I mean is this: yesterday I was shopping. Specifically, I was shopping for comic books (manga) as a gift for a friend. I’ve never shopped for manga before, and I was simultaneously
trying to guess which copies he might have already read as well as thinking about how much money I wanted to spend. In the middle of that we had an earthquake. It registered as 4.6 on the
Richter scale. I certainly felt it, but I also ignored it and kept thinking. A few minutes later I made a decision, paid for the purchase, and walked out of the store. As I strode away, for some reason the idea that we had just had an earthquake hit me. I was a little taken aback, not that we had had one, but that I had forgotten about it so quickly. When did the earth shaking become such a normal thing?

It wouldn’t really be a blog about Japan if I didn’t insert some amusing images that were captured by my very own camera here in this country.

In many public toilet stalls you will see this device in the corner. It holds your baby for you while you relieve yourself.

Scurvy, be gone!: This is a sign found in front of many city parking lots. I know that it is supposed to be a fancy “T” but when I see the sign, my eyes usually read, “24h limes.” As if the city is passionate about its residents getting Vitamin C around the clock. 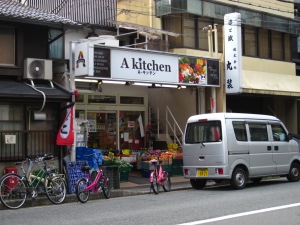 Wait, can I cook here?: This grocery store in Kyoto is called, “A kitchen.”

For sale in Kyoto: ski masks that come with a warning

Calling The Village People: The name of this restaurant in Kyoto is “Mr. Young Men.” Your guess is as good as mine.

Fore!: At Koganei park in Tokyo, a sign asks guests not to practice their golf swing.

Physical Education: in a country that loves cuteness, even the red and white blood cells can be furry stuffed animals. The school nurse at my elementary school had these on her desk one day. 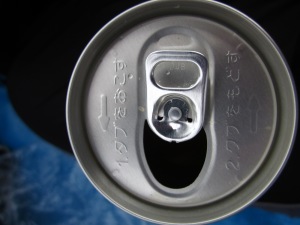 Instructions on a soda can: The raised printing explains how the tab should be pulled forward, then pushed back in order to enjoy the drink inside.

Tissue box covers: In Japan, they sometimes put fancy covers on tissue boxes. Here is one featuring a character from, “Nightmare before Christmas.”

Flirting with Colonel Sanders: A hard plastic figure of Colonel Sanders stands outside KFC year round, hands outstretched to welcome chicken lovers in. At Christmas, he wears a Santa suit.

Um, the birth of Christ wasn’t a group picture: at Christmas time, I spied this nativity set, arranged according to height, with the animals in front and the wise men in the back.

“COW”?: A bar of soap in a handicapped restroom at the Nico Tourism Office 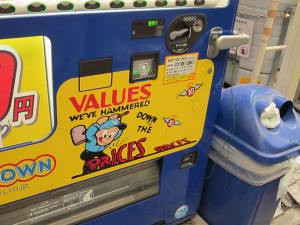 “We’ve hammered down the prices”: A sign on a vending machine, advertising the fact that it sells drinks for 100 yen instead of the 120-160 yen prices of other machines. My favorite part is the little tens who have died and are floating to heaven with angel wings.